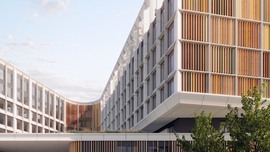 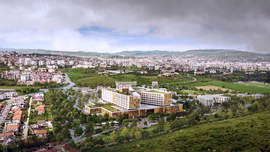 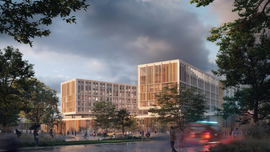 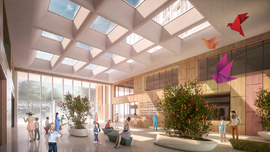 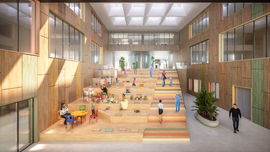 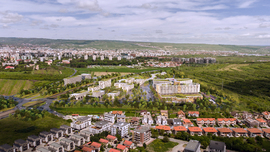 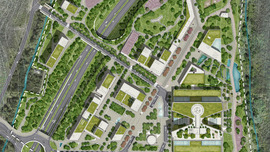 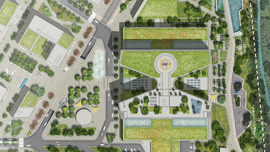 Cluj-Napoca Emergency Clinical Children’s Hospital is to function as the first public hospital in the Transylvania offering integrated medical services in paediatrics. The aim is to develop a state-of-the-art hospital, which also plays the role of an urban catalyst in an area undergoing urbanization. This public health unit is to provide prophylactic and curative medical care for children regionally. Through collaboration with the Iuliu Hațieganu University of Medicine and Pharmacy, the hospital also covers teaching and research activities. The plot dedicated to hospital lies southeast to Cluj-Napoca and is more than 11 hectares in total area. The design brief also requires urban development and phasing proposals and needs to take into account the new beltway running adjacent to the site.

The primary design consideration was to provide access to natural light and connection to green areas for out-patient care units and other clinical care functions. Special attention was paid to the separation of circulation flows: acute and organised patient flows, family members or visitors, technical equipment and material flows all follow dedicated routes.

The main concept of the building is based on flow which appears in the internal layout as well as the external building form. The shape of the nursing tower reflects this organisation. The tower appears to almost float on top of the stepped-in technical second floor.

Statement of the Jury regarding the entry:

"The Jury appreciated the project for its ability to become an architectural landmark for the area, while also using the available land judiciously. The proposal presents a complex urbanistic approach, imagining a possible strategy for the future development of the area without proposing a high-density scheme. At the same time, the proposed general scheme of the project ensures a high functional efficiency, opting for a compact typology which manages to create an iconic image, while maintaining a scale that is friendly towards future users.

The project proposes a compact typology that allows a consistent part of the land allocated for the hospital for other uses and complementary functions. The jury appreciated the proposed urbanistic strategy, which creates a clear and balanced future usage of the plot.

Functionality of the proposed solution

This scheme has great clarity and elegance in plan and section. The clustering of 4 repeatable ward templates into the butterfly form was considered by all of the jurors to be a sophisticated response to a very important and significant component of the brief. The public lift access via the ‘epicentre’ of the butterfly connecting to the social heart space public concourse at ground floor was considered particularly successful as it was recognised that it would contribute to a rich and interesting spatial experience and support a clear intuitive sense of orientation for easy wayfinding.

The scheme however has not fully resolved the key clinical flows / circuits in order to prevent the need for bed movement passing through this public entrance / reception / waiting space. As the scheme is split into two distinct wings of the building at ground level by the public concourse the key horizontal clinical flow at this alternative level would also therefore not be possible without bed movement passing through public space. It was considered by the jury however that by adopting some simple adjustments these conflicts could be resolved.

Whilst the brief is relatively quiet on the subject of mechanical plant / technical spaces serving the hospital, this scheme does not demonstrate a clear understanding of these core requirements which are required for any hospital. Area has been allocated at the basement level for some of the key technical spaces that are typically required low down in the building, but the scheme does not seem to have resolved the requirement for integrating air handling equipment for mechanical ventilation, particularly for highly serviced areas requiring a lot of air changes such as the Operating Theatres and Intensive Care Unit. The scheme does indicate 4 technical space zones within the triangular zones established by the typical ward template on level 2 above the theatres. This however would not be a workable solution as they are in-board of the building perimeter and would therefore not be able to get any external free area for air supply and exhaust. The flows within the Theatre department are currently sub-optimal, although it was considered by the jury that the geometry of the space could comfortably accommodate an improved reconfigured layout.

The quality of the urban intervention

The project has the merit of proposing a compact form that benefits from a welcoming gesture through the opening angle of the two hospital wings. Through this gesture, the building becomes open both to the public and the entrance area, and to the natural landscape to the East. Additionally, the proposal offers multiple access possibilities arranged in a hierarchy depending on users categories.

The plastic expressiveness of the proposed volume

The proposed image is iconic and recognisable. Although developed in height more than the majority of the projects, the proposal manages to relate to the human scale due to the treatment of the first two levels above ground. Those establish a pleasant relationship at the public space level, offering a friendly ambiance that invites exploration and immersion.

The quality and atmosphere of the proposed spaces

The jury appreciated the welcoming and friendly atmosphere of the main entrance area. This area further directs a pleasant and intuitive pathway, subtly adapting to the land’s elevation difference. The jury appreciated the project’s concern to achieve circulation comprehensibility through hierarchical relationships and intuitive use, both at the level of the common spaces designated to the patients and the medical flows.

Conclusions
The project stands out through its urbanistic and volumetric qualities. The Jury appreciated the concern for obtaining an iconic image, which highly manages not to compromise the good operation of the hospital. However, the jury remarked on a series of functional vulnerabilities, such as the intersection of public and medical flows, the incorrect configuration of the Operating Theatre and the lack of functional feasibility of the technical spaces that are not connected to the building’s exterior.