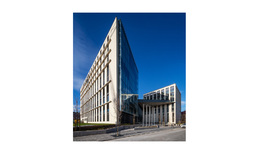 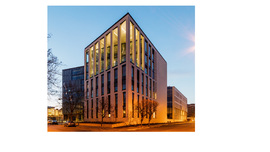 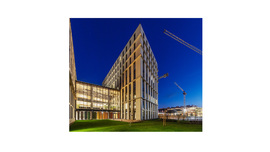 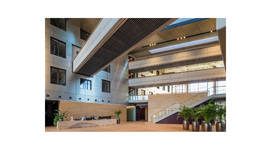 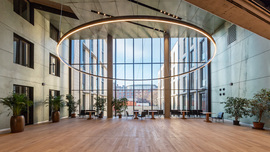 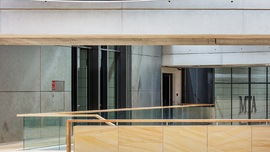 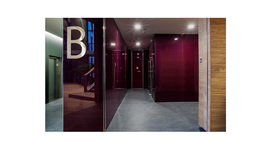 The new building complex of the Hungarian Academy of Sciences (MTA) provides a 21st-century environment for 750 researchers of three humanities (humanities, social sciences and economics) with rooms for researchers, a multi-purpose conference room, a library, and a range of special functions, for example an archeological genetic engineering laboratory.

The three blocks of the building complex vary in height, volume and elevation and thus expressly refer to the three research institutes. At the same time, incorporating the common main entrance, the four-story high lobby, wedged between the three volumes, connects the units not only from the outside, but, thanks to the bridges linking the upper floors of the various blocks in the lobby, the different fields of science and their interconnected nature are distinctly recognizable in the interior as well. The building clearly reflects the intent of the client to create community spaces and meeting points for those co-working in collaborative research, and to maintain synergies between research areas, while preserving the independence of the institutes, previously located in various city locations, somewhat isolated. The entrance hall, the conference room, the library and reading room, the cafeteria, the roof garden, which is accessible from all three buildings, and the green courtyards between the blocks are all such shared community spaces.

The larger scale of the new building complex is refined organically by breaking up its elevations and volumes - various heights, four-, six- and eight-story blocks (towers), and the lower block of the lobby linking them -, in accordance with the site structure, framed by two streets. The bay-like recess in front of the main facade not only highlights the main entrance of the building, but also expands the space of the rather narrow street, offering a grander access to the building.

The entrance hall plays a significant role in space organization and access. From here, one can access the upper floors with the elevator and the open, floating single flight stairs installed into the lobby, and by using the above-mentioned bridges connecting the buildings. In the lobby, as the most important community space used by all, besides the functional, traffic and socializing aspects, mood-defining design elements, interior design and artistic solutions have also become a priority. Thus, we installed the enlarged graphic print version of a glass sculpture by the artist Ilona Lovas, from 1999, on the brushed-metal clad inner wall and ceiling of the multi-story lobby.

The eight-story trapezoid building for the human sciences reaches deep back from the street line. Its ceramic and glass-clad elevation acts as a climate facade: cooling and heating of the building is provided by lamellae regulating air flow. The DNA laboratory that provides multidisciplinary research methods for archaeological analysis is located at the basement level. This block and the four-story building housing social scientists are connected by the rear facade of the atrium; a generous, spacious green area was created between the two building wings providing a soothing environment that can greatly support the in-depth research activity being done inside. At the street intersection, at the corner of the site, the more opaque three lower floors of the six-story block incorporates economic research rooms, offices, seminar rooms and the archives. The three top floors open up and behind its curtain wall facade we placed the multi-story open stacks library and a reading room, while at the basement level a library storage is located.

In addition to the functional requirements, our design principle was to create bright and comfortable spaces with lots of natural light and ventilation, which we reached by designing green areas and various spaces in between the building units. This concept has been similarly applied in the case of research rooms or smaller lounges, and the three-story high library, the cafeteria downstairs or the entrance hall with access to natural light by the glass facade and skylights.

The interior design - based on the needs of the client - only affected the sections accessible by the public (cafeteria, library, entrance hall, cloakroom, lecture hall, hallways), and adapted to the simple and strict architectural structure and comprehensive floor plans of the new research institute complex. The old buildings of the Hungarian Academy of Sciences, from which the research institutes now moved after several decades, had a unique, archaic atmosphere, which we tried to convey in the new environment with the use of sophisticated and advanced materials and high-quality technical and engineering designs. The old atmosphere is reflected in the natural materials, with mostly stone and wooden panel surfaces, as in the library or conference room, which in addition has a sound absorbing and reflective acoustic membrane cladding.

The cast-on-site artificial stone flooring in the entrance lobby evokes the classical atmosphere of old terrazzo. As a classical element, the grid of templates also appears on the exposed concrete wall surfaces that otherwise refer to the present. The recognizable differentiation of disciplines, besides the clear elaboration of the architectural structure, is also supported by the use of colors consistently rendered to the various institutes and applied throughout on the walls and the Marmoleum flooring. A key aspect of the design process was to install energy saving illumination, ergonomic and ambient lighting design and light management achieved by the concurrent use of concealed and accent lighting.

In the design, modern environmental aspects have been crucial, especially water saving and energy saving heating systems. The latter is facilitated by the NGBS heating-cooling suspended ceiling system, which helps cool and heat most of the building with its 6,500 square meter active surface. In every room of the building, iCON automation system monitors temperature and dew point as well as window opening. The data sent from the 430 thermostats is displayed by a Loxon system, but the regulation of the iCON works independently.