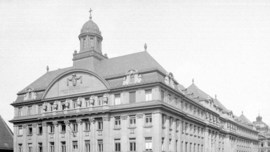 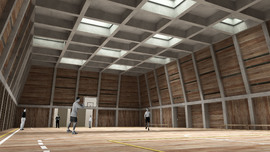 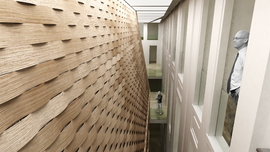 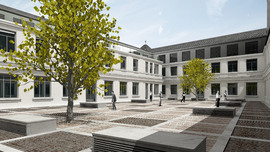 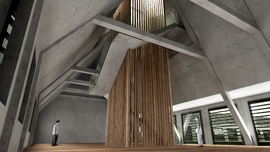 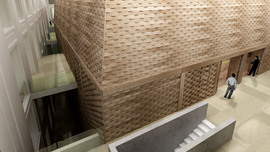 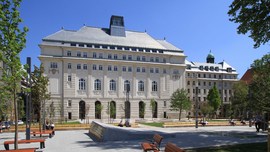 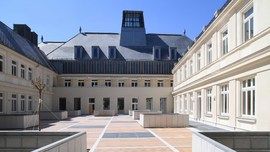 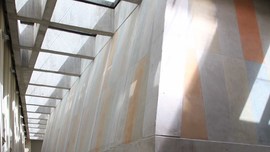 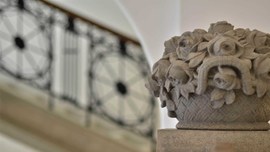 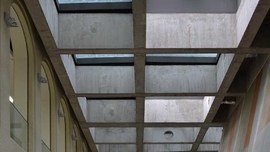 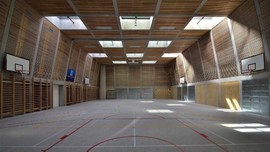 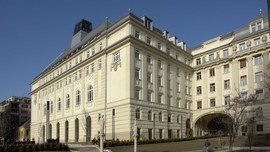 The neo-Baroque mansion, located in the heart of downtown Pest on the Danube bank, was built by the Piarist Order with Dezső Hültl as its architect during World War I, between 1914 and 1917 to replace the 18th-century monastery. One wing of the building housed the school (Building A), while the other was used as the monastery (Building B). The building, with its double-height neo-Baroque chapel, the similarly double-height gym and shops for rent, was hit by a bomb in World War II and was severely damaged. As a consequence, the roof structure and tower of the Danube side had to be pulled down. After the nationalization of 1950, the Piarist order had to move out of the building, and the Eötvös Loránd University (ELTE) operated in its place for decades. The building complex was only returned to the Piarists at the beginning of the nineties, but it was left empty for ten years because the order wanted to move back to a modern, economically sustainable building. The architectural program was to create a building that accommodates the monastery and the high school, combining old traditions with modern values ​​and ensuring sustainability, and the most modern education and operation.

We refurbished the grand old staircase and smaller stairwells, and added new units based on these expectations. On the ground floor and in parts of the first floor, rentable stores were designed, which greatly contribute to covering maintenance costs. The shops on street level ensure that the building is connected to the city's circulation. At the height of the 5th floor, we rebuilt the former roof structure using the original plans, with rental offices and monastic functions in combination. Partially preserving its ornaments but reinterpreting its space, we have also refurbished the great Piarist chapel that can be accessed from the street independently.

The education and community spaces of the high school were created on the 2nd to 4th floors by building up the former open courtyard, originally built with inferior proportions; in its place, a four-story high concrete monolithic block was designed. On the ground floor of this block, which can be interpreted as a contemporary architectural symbol, a large event hall, while on the second floor a double-height gym with leaning walls was built. The gym block was placed in the courtyard with a distance to the original walls, creating a new in-between space structure based on a "house in the house" principle - this way we could ensure the flow of natural light into the interior of the building by the skylights installed into the ceiling grids on the roof. The focal point of the high school function is the second floor, with a school chapel and the aula. On the roof above the gym, a small-scale school yard was created, with the challenges of making it walkable, ensuring the flow of natural light to the lower floors, and at the same time achieve flawless waterproofing and smoke management for the lower floors.

While carefully preserving its original character, a high quality building was built that fulfils 21st century space and material requirements, potentials and functional needs through its architectural interpretation, adding value to the Piarist Order as well as the city of Budapest.